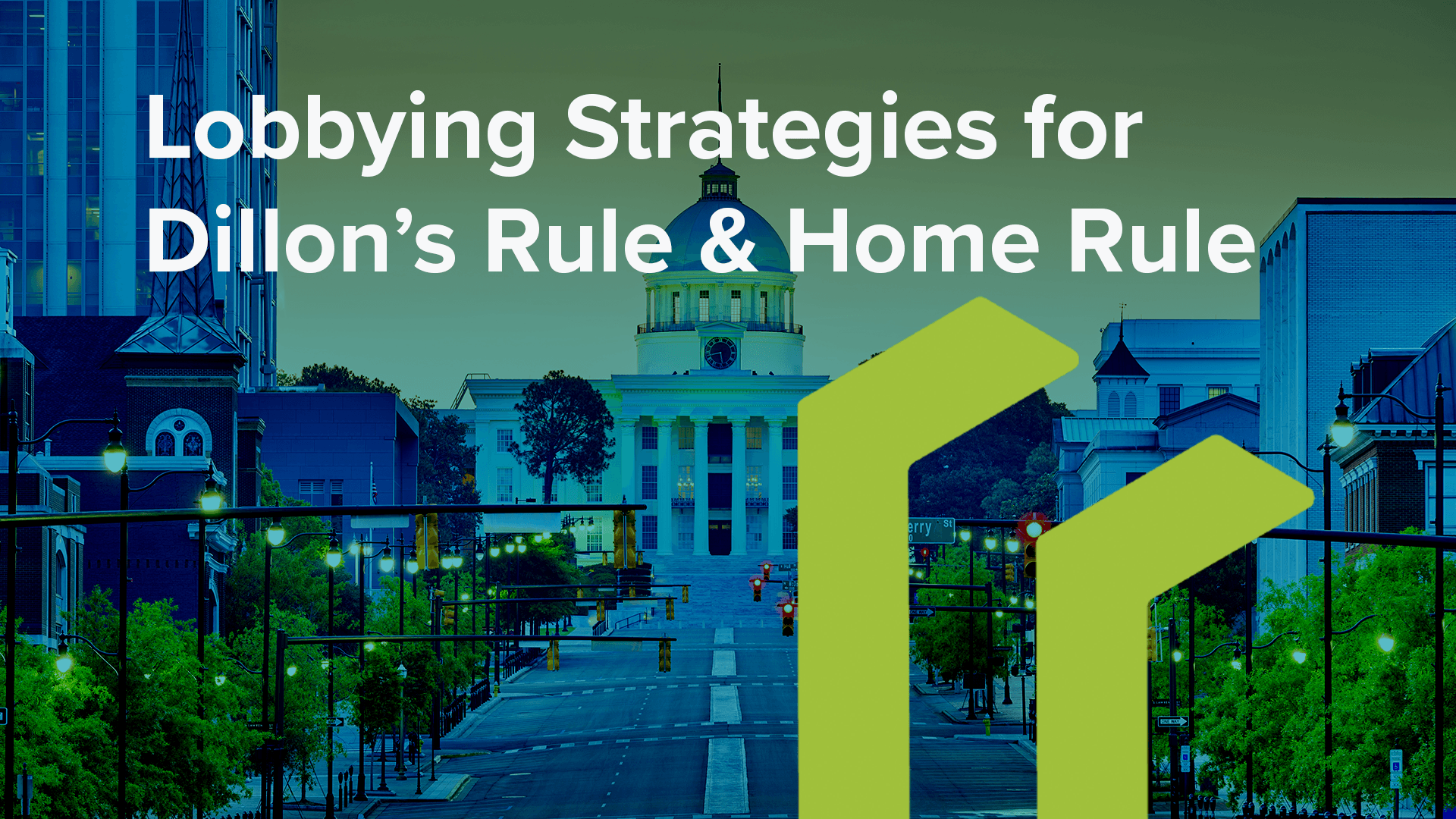 Dillon's Rule and Home Rule are two different approaches to local governance that have a significant impact on the kind of laws and ordinances municipalities can pass in each state.

Dillon's Rule takes a narrow approach to local authority, essentially stating that local governments only have the powers expressly granted to them by the state.

What is Dillon's Rule?

According to one definition from the National League of Cities, Dillon's Rule limits a municipality's power to the following:

What is Home Rule?

Home Rule Definition: Home Rule is a delegation of power from the state to its political subdivisions (including counties, municipalities, towns, townships or villages).

A municipality with Home Rule status can exercise any power and perform any function unless it is specifically prohibited from doing so by state law.

The majority of U.S. states apply both Dillon's Rule and Home Rule in some way. It's difficult to present a simple, meaningful list of which states are Home Rule States and which ones are Dillon Rule States because there are so many nuances to each state's approach.

In Texas, cities with more than 5,000 residents can vote to adopt a city charter and thereby become a Home Rule city. For a more complete list, see page 6 of this 2016 white paper by the American City County Exchange.

In today's political landscape, it's not enough to know whether a state is a Home Rule state or a Dillon's Rule state, since most states use a blend of the two principles, and state legislatures frequently modify the scope of local authority.

And the courts have also contributed to the variations from state to state with different interpretations of the existing statutes.

The best approach is to find out what level of local authority the city you are in has, and how that state has historically handled conflicts about local authority in the courts. Understanding a state's approach to local authority is an essential step when crafting an advocacy strategy for a particular local policy issue.

Generally, in the states with the strongest Home Rule protections, municipalities are more likely to be able to successfully pass new forms of legislation and defend their right to do so in court than in states where home rule is not protected in the state constitution.

Recently, this has become especially important for government affairs teams because Home Rule municipalities have the ability to establish local laws that may be stricter than state law, unless the state expressly prohibits this.

Here's an example, from Ohio, a strong Home Rule state:

Municipalities throughout Ohio, including Democrat-controlled Cincinnati and Cuyahoga County, have recently begun passing ordinances that ban single-use plastic bags. These bans significantly impact the operations of restaurants, grocers, and many other retail segments. Because of that, retail trade associations typically oppose them when they come up in local discussions.

After repeatedly losing the fight at the municipal level in Ohio, many trade associations then worked to convince legislators in the Republican-controlled statehouse to pass a state law to bar local governments from passing these laws.

Those efforts were successful, and the state legislature included such a ban in the latest budget. But the fight doesn't end there.

Since Ohio has strong protections for Home Rule in its constitution, it's likely that the municipalities that passed these bans will sue the state government in court, claiming that the ban infringes on the powers granted to them in the state constitution. And it's anyone's guess who will win that battle, but in a state with less protection for home rule, the municipalities would likely be at a disadvantage in court.

This kind of conflict is becoming more typical across the country, especially in cities where the political party in power is different from the one at the state level.

As political gridlock slows down the legislative process at the federal and the state level, advocacy groups are turning to cities to advance their agendas. Regardless of the political party in power, advocacy groups are finding it much easier to convince 10 or 15 council members to pass an ordinance than to build a coalition among 100 or more state legislators.

However, in states where the same political party dominates the state government and controls the largest cities, government affairs teams should watch out for ideas that are gaining popularity in cities across the state.

Sometimes, when state legislatures notice a trend of cities passing a specific piece of legislation, they respond by codifying that legislation into the state law. This creates a more uniform legal environment across the state but can be a major loss for an advocacy group that opposes that particular piece of legislation.

This happened just this past year in Washington state, where the state legislature took notice of the growing trend of municipalities passing single-use plastic bans across the state and passed a statewide ban that took effect Oct. 1, 2021.

This means government affairs teams can't afford to ignore municipalities in any state, although in some cases, a particular city might be less likely to win a legal challenge in a case similar to the Ohio one.

Even in municipalities that don't have Home Rule, local leaders can still pass ordinances and policies that can have a significant impact on businesses.

While a city without home rule might not be able to pass a plastic bag ban, it would typically still be able to increase existing fees, change laws around permitting processes, or increase reporting requirements for existing regulations—building permits, street opening permits, animal grooming licenses, etc.

This kind of local policy change can be incredibly disruptive to businesses that are heavily regulated at the local level, so government affairs teams can't afford to ignore local government discussions in Dillon's Rule states.

Local Governments Have a Sense of Empowerment Following COVID-19 Pandemic

The balance of power between state governments and municipal governments has been a contentious topic for many years, but the last few years have seen cities begin to test the boundaries of their authority even more in response to the COVID-19 pandemic.

As cases of the virus surged but most state governments declined to take action to slow down the spread, cities began to take initiative and issue things like mask mandates, capacity limits for public spaces, proof of vaccine requirements, and other public health measures.

Many local leaders discovered that they can move more nimbly than their state governments—and in some cases, they learned that their state might not always have the means or political will to take every case to the courts.

Now that local leaders have gotten a taste of this expanded de facto authority, they may act more empowered in the future, regardless of whether their city has Home Rule. Local lobbying will be more important than ever, and keeping up with local policy change will become one of the most important tasks of government affairs teams.

Find out how you can get timely alerts for the issues that you care about from more than 12,000 municipalities across the U.S. by scheduling a demo.