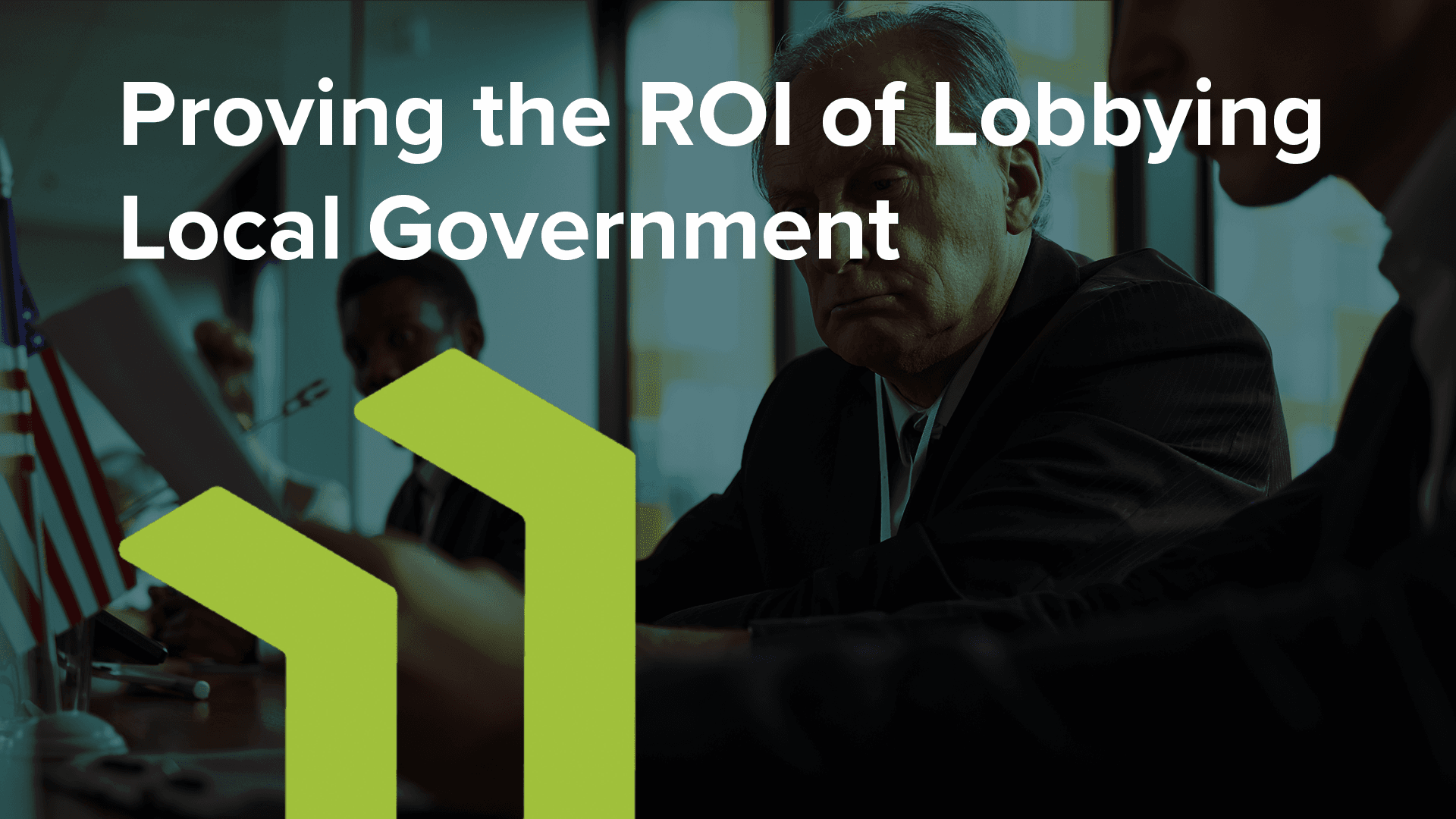 If you’re an experienced government affairs director, you know that the most effective lobbying strategy is one that operates smoothly in the background. If you’re doing your job well, you’re laying the groundwork for legislative policy decisions that favor your industry and you’re doing the legwork to prevent bad legislation from passing.

Because a strong government relations practice can often take a low public profile, in times of financial strain, government affairs is one of the first business functions to hit the chopping block.

However, the business value of government affairs at the local level cannot be overstated—and it only increases when local governments are strapped for cash and looking for new revenue.

In this article, we’ll dive into eight communication strategies you can use to prove the business value of your government relations strategy—and the one game changing tool you can use to minimize the time it takes away from actually doing your job.

If you put this government relations strategy into practice, no one in your organization will ever again question the value of your government affairs team.

Wouldn’t it be nice to have a representative from your government affairs team taking notes on every city council meeting in your state every week? With Curate, you get something better. Learn how local legislative tracking software can improve your government relations strategy.

1. Educate stakeholders about the role of local government

Much to the chagrin of local elected officials, most people do not know what the local governments of the cities and counties they live in do beyond picking up trash and cleaning streets.

But with the current state of political gridlock at the national level and increasing polarization at the state level, local governments are becoming the new centers of policy-making in America. In Ohio, for example, the Republican party dominates the state legislature, so liberal-leaning groups have a hard time getting anything passed at the state level. But 87 percent of Ohio’s 11.7 million people live in its five largest metropolitan areas, and those cities are dominated by Democratic leaders. So organizations that align with the Democratic party are finding more success with their advocacy efforts at the local level than at the state level. And that trend is not unique to Ohio.

To make sure your stakeholders understand the value of your government relations efforts, you need to make sure they understand the role of local government. In most states, cities have a wide range of powers that can impact your stakeholders’ bottom lines. Most cities have the power to set labor laws like minimum wage requirements, block or allow the sale of marijuana, decide how much funding to devote to affordable housing and community safety, and raise or lower fees relating to business licenses, building permits, connections to city infrastructure, etc.

Now, since you’re a government affairs director and not a high school civics teacher, you may not love the sound of educating people about the role of government. To make the best use of your time, it’s best to focus your efforts on the current policy issues that are most relevant in the cities where your stakeholders do business. You can also share one of the free educational resources we offer about why businesses should engage with local government.

If your coverage area includes several cities, it can be hard to keep up with all of the potential policy risks at the many local councils, commissions, and committees without a government relations software tool like Curate. Instead of digging for agendas on a dozen local government websites or trying to show up to as many public meetings as you can possibly fit into your schedule, Curate can provide custom alerts whenever one of the topics you’re interested gets mentioned in the meeting minutes or agendas of a local government group.

2. Collaborate with your external communications team to make your work visible

Tracking policy issues at the local level across an entire state is a full-time job, and it doesn't leave a lot of extra time for communicating what you’ve found to your stakeholders. But your job security depends on making your work visible, so the key is to join forces with whoever is responsible for external communications in your organization. If you’re a government affairs director at a statewide association, you may be able to insert your policy updates into their regular email and social media marketing efforts.

Your external communications team may also be able to help you create and distribute data visualizations that make it easy to tell the story of policy trends across the state. With a local legislation tracking tool like Curate, you can easily generate a heatmap showing how many municipalities in a state or region are discussing a particular topic. With that data, your communication team can create a wide variety of graphs and charts to demonstrate the importance of advocacy efforts at the local level.

Nothing gets your attention like finding out your city council is considering an ordinance that would cost you tens of thousands of dollars every year, or completely disrupt the way you do business.

But that’s a very real scenario that government affairs teams face all of the time. And unlike at the state or federal level, at the local level, new ordinances can go from idea to a vote in rapid time.

For example, in the utility industry, a hot-button topic is natural gas. Climate activists have been urging municipalities to move away from or completely ban natural gas hookups in new construction for years, and many of them have taken action or are beginning to consider it. But most utilities offer natural gas among their suite of products, and any kind of ban on natural gas would have a major impact on their business operations.

To prove the value of your government relations work to your stakeholders, make sure to communicate the financial risk at stake with each of the proposed policy changes that you are advocating for or against.

When the work of government affairs teams goes unnoticed, it’s often because they’re working in their own little silo without enough interaction with stakeholders. Even if you don’t think you need to hear from your stakeholders about their concerns in order to identify the smartest advocacy priorities for your organization, your stakeholders will have an easier time seeing the value in what you do if they feel like you are actively fighting for their personal agendas.

In some industries, this kind of feedback loop is built into the structure of statewide associations. Volunteer member committees set the policy agenda for the government affairs team, and the team figures out the best strategy to accomplish that agenda.

But if you’re in an association where members are not as engaged with your advocacy efforts, an easy way to boost the reputation of your government affairs team could be to regularly survey members about their legislative priorities, and then share the survey results with members along with details about how you’ll tackle each issue.

If you’re a government affairs director for a private company, establish a consistent feedback loop with all of the C-level executives across the business to make sure your advocacy priorities align with theirs. They need to feel free to let you know about any local legislative issues they encounter in their operations so that your team can get involved when there is still time to influence the outcome.

And to go one step further, sometimes you may even find opportunities to bring your stakeholders into your advocacy work by inviting them to meet with local officials with you. By sharing their own personal stories, they may have more sway with local officials than you would as a lobbyist, and they’ll get a behind-the-scenes look at your work and gain a new appreciation for your efforts.

Local governments love to borrow ordinances from their neighbors. If a policy that is harmful to your industry passes in a small town outside your region, there’s a risk that nearby towns will adopt the same policy and it will eventually spread to your region. Experienced government affairs teams know this, but your stakeholders can get tunnel vision, only caring about what is going on in their immediate region.

Some of the most dangerous policies can come up in the smallest cities because they often have the fewest staff available to research legislation before it gets drafted. And those cities are often the ones without strong local news coverage, so the best way to find out about what’s coming in the town council is to go straight to the meeting agenda or minutes with a government relations tool like Curate.

The most effective government relations work is done behind-the-scenes. Effective lobbying involves a lot more one-on-one meetings with elected officials and their staff than it does giving public testimony at public hearings. If your first time engaging with a group of officials is a public testimony at a meeting where a vote will happen, you’ve missed the boat on influencing the outcome of that vote.

But that doesn’t mean you should ignore all opportunities to give public testimony. There’s still value in going on the record in support or opposition of an issue, even if it’s more about making a grand gesture to “show your work” to your stakeholders. It’s easier to tell the story of your efforts to your stakeholders if you can point to your public testimony, rather than just saying that you had a lot of phone calls.

When you find yourself on the losing side of a local issue, it’s important to inform your stakeholders about the impact of the new policy both in the short-term and the long-term.

When you share the post-mortem analysis with the rest of your organization, point out any hidden wins or compromises that you secured through your local advocacy efforts. If it could have been worse, make sure you quantify just how much worse it could be.

But even when there’s no silver lining, be transparent with your stakeholders—don’t try to sugarcoat a true loss. Sometimes, a major loss can motivate other members of your organization to become more engaged in supporting your work to prevent more losses in the future.

When your local government advocacy strategy pays off, share the news with your stakeholders. This is not the time for modesty—these wins don’t happen by accident. If you blocked a huge fee increase or if you paved the way for an ordinance that will save money, make sure your organization knows the role you played in securing a favorable outcome.

Tags: municipal, government
Back to Blog