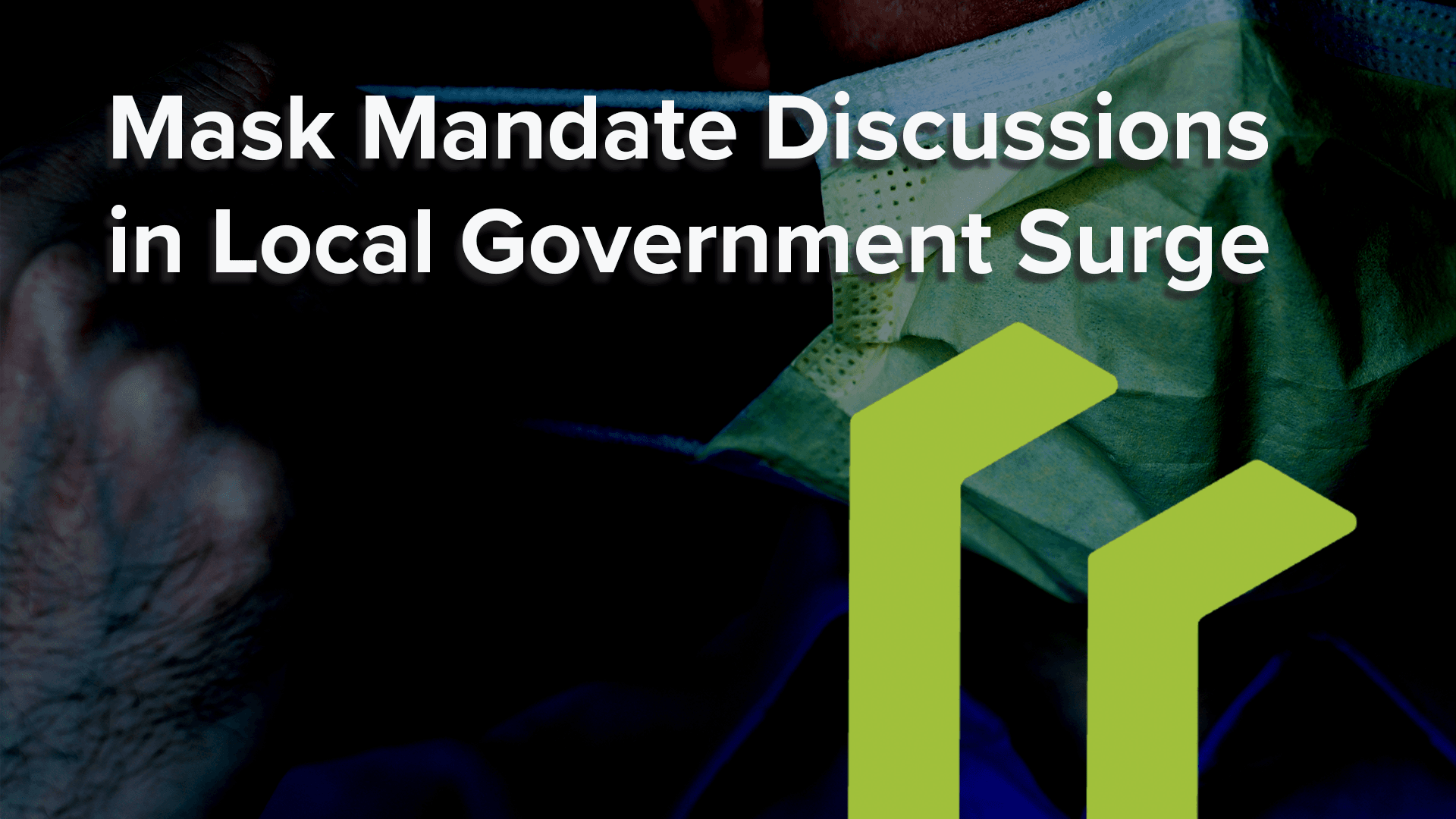 As cases of the Delta variant of the novel coronavirus surged over the summer, discussions in local governments about measures to slow the virus’ spread have also risen steadily.

Across the country, elected officials at every level of government have debated whether they have the authority to issue mask mandates or require vaccination for the public or their own staff. The wide variation in decisions coming out of those discussions has left the U.S. with a patchwork of confusing and often conflicting statewide and local mandates.

Between March 1 and August 31, there were 2,588 mentions of COVID-19-related policies in municipal governments across all 50 states, according to research from Curate, a FiscalNote company. The vast majority of those discussions—1,924 mentions—focused on local mask policies. Discussions related to proof of vaccination made up about a fifth of the discussions with 529 mentions. 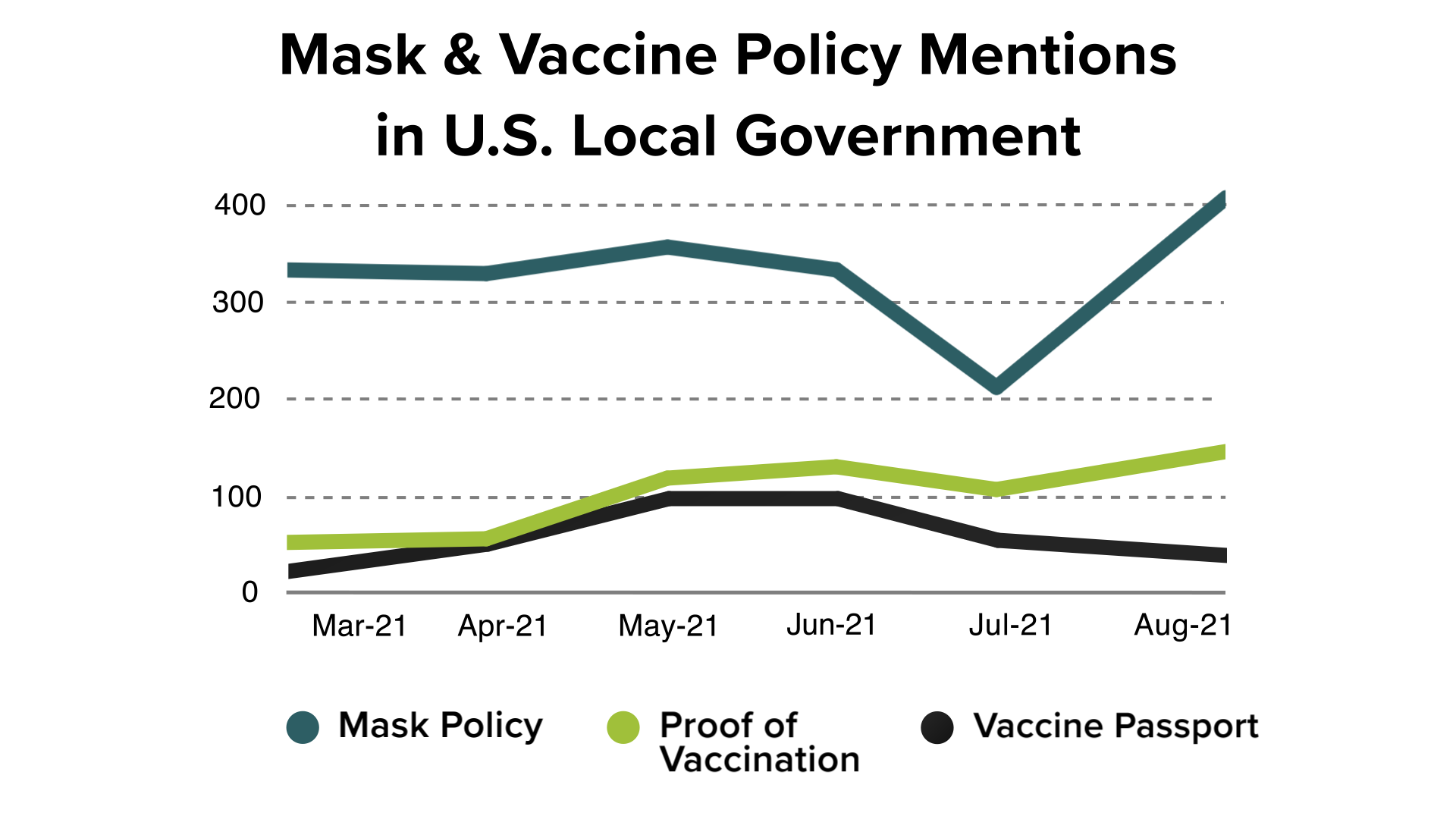 Debates over local mask policies have been especially hot in states where the governor has issued some kind of statewide order—either imposing a mask mandate or banning any local government from issuing one.

After Texas Governor Greg Abbott banned local jurisdictions from issuing any kind of mask mandate, some municipalities and school districts simply defied the ban. Others, including El Paso, took to the courts to sue Abbott over the ban.

On Aug. 16, the El Paso city council called an urgent public meeting to discuss their legal options to address the public health emergency. Seventy residents showed up to make public comments either in favor of or against a local mask mandate, according to the meeting minutes.

In Oregon, after Gov. Kate Brown and the Oregon Health Authority issued an order mandating that healthcare workers, school employees, state employees and others show proof of COVID-19 vaccination or a documented exception by Oct. 18 to continue working, at least three counties declared a state of emergency to put pressure on the governor to withdraw the mandate.

The counties cited concerns that too many providers of core public services would walk off the job rather than adhere to the vaccine mandate.

In states without a statewide mask mandate or ban, many municipalities have issued mask mandates or proof of vaccination requirements for their own facilities and employees, but have been much more hesitant to make orders that involve the general public.

Even when they issue orders for their own staff, municipal leaders often spend a lot of time debating how the orders will be enforced, as happened in a meeting on Aug. 26 in Sunrise, Fl.

However, the San Francisco International Airport made headlines on Sept. 21 by becoming the first airport in the country to require vaccination for all on-site personnel. The order imposes a fine for non-compliance, and also requires weekly COVID-19 testing for those exempt from the vaccine for medical or religious reasons.

Keeping Up with Ever-changing Local Policies

Many businesses with operations in multiple states—especially national retail chains—have struggled to keep track of changing local public health regulations throughout the pandemic.

Some national associations attempt to provide guidance on statewide regulations with COVID-related blogs, but tracking constantly evolving regulations at the municipal level remains difficult without the help of local legislation tracking tools.

Government affairs professionals and business leaders who need to keep track of the ever-changing local policies related to COVID-19 rely on local legislation tracking software from Curate. Find out how you can get timely alerts about local policy issues like public health orders that could affect your bottom line by scheduling a demo.

Tags: Mask Mandate, Proof of Vaccination
Back to Blog