While some false alarms are caused by absent-minded home or business owners who accidentally trigger an alarm when entering their property, the majority of them are caused by overly sensitive or faulty sensors that automatically send alarm signals.

To try to prevent false alarms and recoup some of the significant costs that come with responding to alarms, municipalities around the U.S. are passing new policies that take a few different approaches to the problem:

From March through July of 2021, mentions of “alarm fee” and “alarm ordinance” came up 261 times in local government discussions across the U.S., according to a report compiled from the Curate database of municipal meeting minutes and agendas. 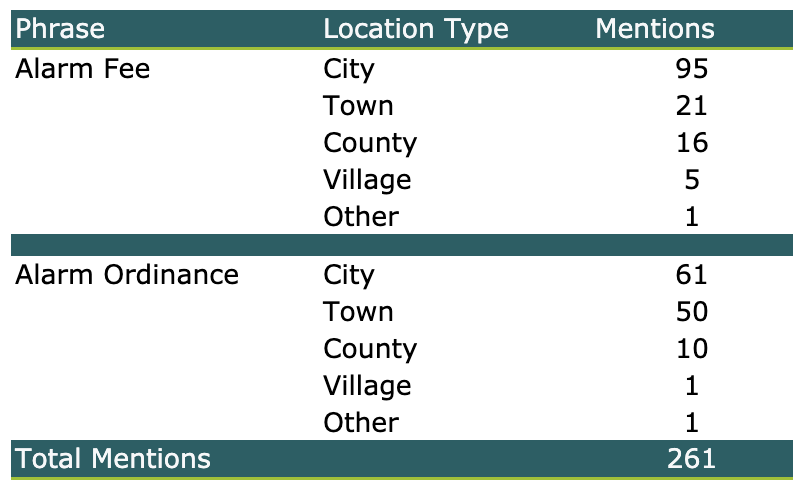 For companies in the security industry, false alarm ordinances can pose a significant financial risk, especially when local governments take the approach of charging alarm companies for false alarms.

Because some faulty alarms can trigger multiple false alarms in a single day, false alarm fines can add up to thousands of dollars a year for a security company.

In 2017, two municipalities in Georgia passed such ordinances.

Although those communities reported that the ordinances were effective at reducing false alarms, the state legislature in March of this year passed a law making such ordinances illegal.

In a public statement, Stan Martin, executive director of the Security Industry Alarm Coalition, noted that cities that have enacted laws fining alarm companies have never proven to be more effective at reducing false alarm calls than those that have adopted a model ordinance drafted by his organization, which puts the financial liability for false alarms on the users.

The SIAC’s model ordinance includes permitting requirements and fines for alarm-users, and requires alarm companies to educate users, but does not fine alarm companies.

That ordinance seems to be gaining traction among many municipalities. For example, earlier this year in Colorado Springs, CO, local officials passed an ordinance that closely resembles the industry’s recommendation, introducing permits and fines for users along with registration and documentation responsibilities for alarm companies.

Security companies also tend to oppose ordinances that include third-party verification that a crime is happening, because they can slow down emergency response times.

However, many municipalities are open to hearing from local security industry representatives in order to incorporate their feedback into the final ordinance.

That’s why it’s crucial for alarm companies and security providers to monitor local government discussions in their area and be ready to engage with local officials when the topic of false alarms comes up.

By finding out early, you can proactively address new proposals or changes in these ordinances and shape future policy in a way that benefits your business.

Find out how you can stay ahead of local false alarm ordinances with local government monitoring software from Curate.